A quick summary of the issue is shown below with additional background information and further reading in subsequent sections. If you have any questions regarding this bug, please do not hesitate to contact MASS technical support.

Since the expression for θid also scales up the movement similarly to the National Build Code of Canada, ductility verifications are excessively difficult to satisfy as demand before considering overstrength is higher than expected by factor of RdRo.

The deflection used to perform a ductility verification is referenced in the variable Δf1, representing the deflection at the top of the wall. The issue causing this bug is that the wrong movement is referenced for Δf1 as the expression where it is used also has a similar modification to deflection included to consider actual expected movement.

For the purpose of checking drift, the actual expected movement of the shear wall is determined by scaling up the modelled linear elastic deflection in accordance with NBCC 2015: 4.1.8.13 (2):

Drift is determined within MASS be scaling up the elastic deflection at the top of the wall. This is done by first determining the shear wall movement based on linear elastic behaviour and effective cross sectional properties which account for cracking as well as stiffening from increasing axial loading. The calculation process is summarized below:

The above figure was taken from a series of articles explaining drift calculations, available here.

By using drift instead of elastic movement for Δf1, a portion of demand is scaled up a second time by factor of RdRo within the inelastic rotational demand expression. This is after it was first scaled up when converting from elastic movement to a drift value which should not be done when performing a ductility verification.

MASS currently uses drifts but should use linear elastic deflections, since that movement is scaled up to being a drift within the θid term where it is immediately multiplied by RdRo essentially accounting for the same thing.

Until it is changed, linear elastic deflections are effectively multiplied by RdRo twice by the time they are factored into the inelastic rotational demand, making ductility verifications difficult to satisfy within MASS and excessively conservative.

The following example illustrates this difference and its impact on satisfying a ductility verification.

Consider the following shear wall, designed using a 20cm, 30 MPa unit with vertical 20M bars placed at a spacing of 600 mm in the plastic hinge elements and 1200 mm for the rest of the storeys. The importance category is Normal.

The wall is then loaded as shown below: 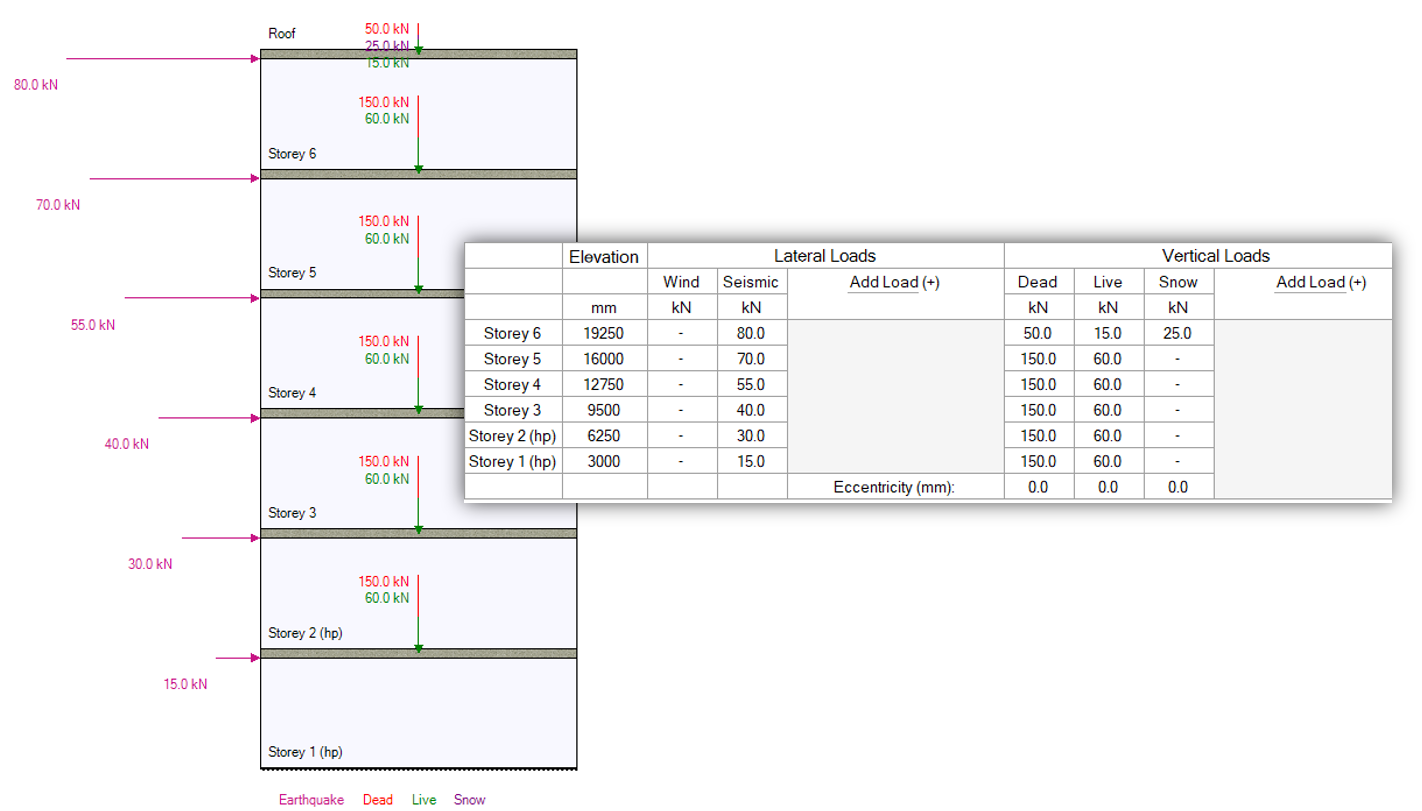 Grouting pattern and horizontal steel can be seen in the screenshot below: 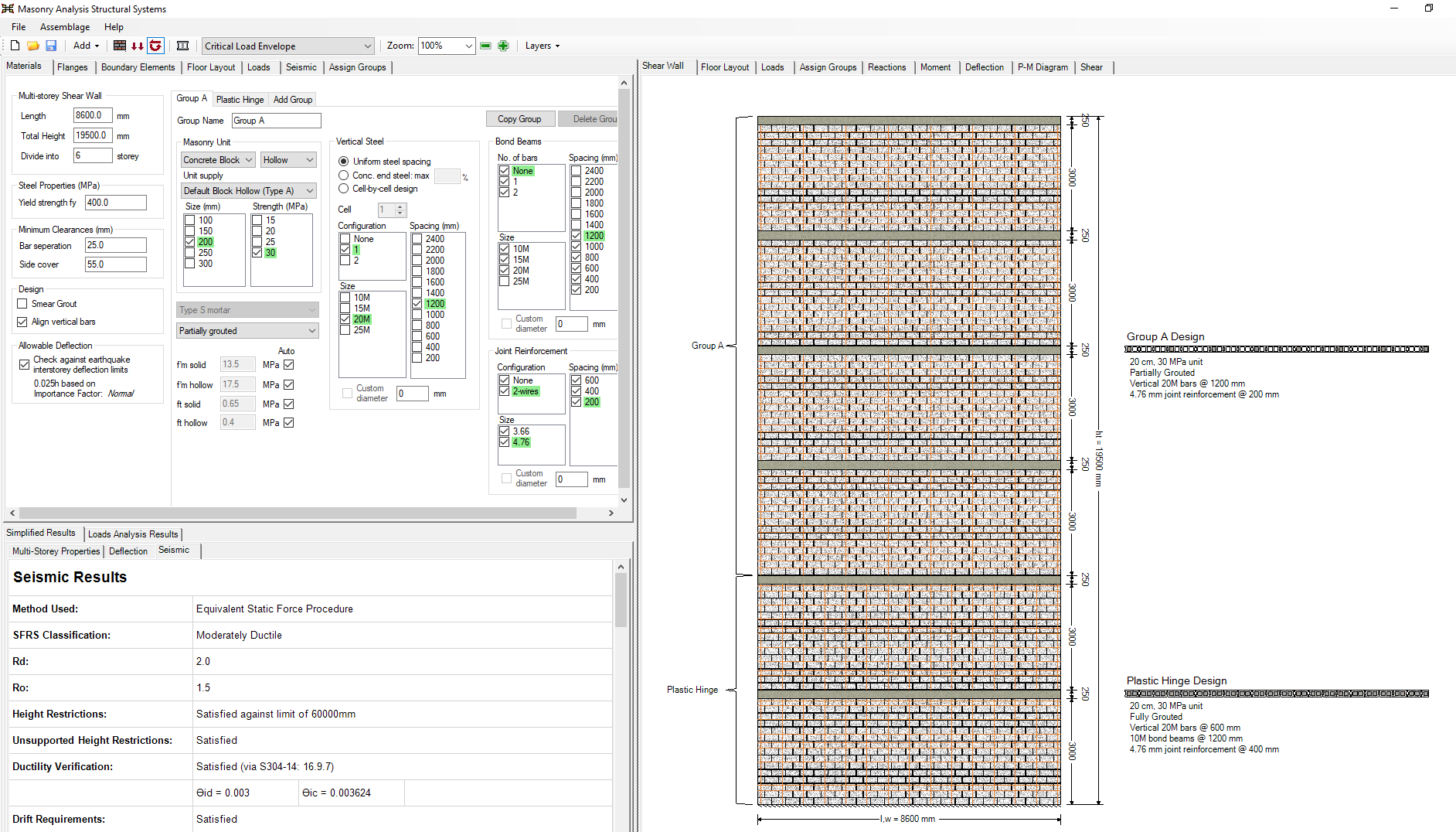 Looking at the Deflection tab, only drift is shown, which is also (incorrectly) used for Δf1 in the ductility verification. The elastic deflection can be calculated backwards by multiplying the drift at the top of the wall by the importance factor and dividing by the product of RdRo. In this example, it means a difference between using Δf1 of 37.67 mm currently, compared to the reduced  12.56 mm. 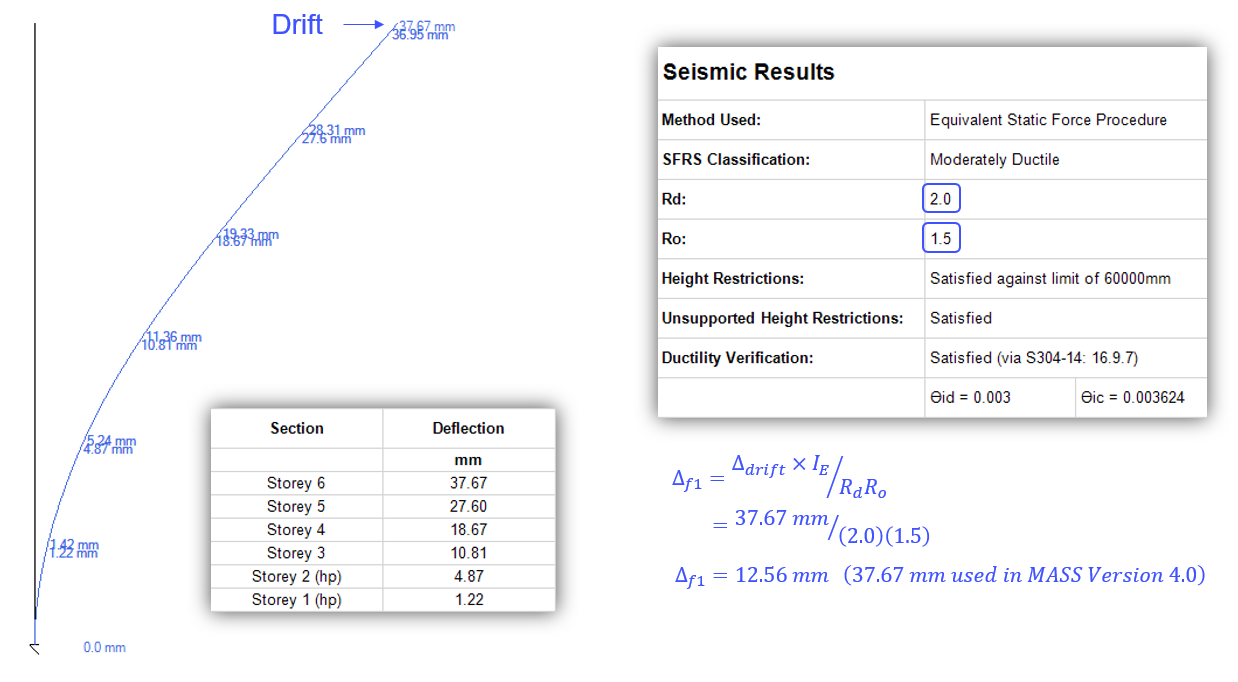 In this example, as seen in the results, demand is equal to the minimum of 0.003 (for Moderately Ductile shear walls) so this change does not affect the result. It can however declare previous design iterations as failing then they might in fact have been successful.

As a result, the ductility verification in MASS Version 4.0 is overly conservative.

This change will be included in the next available technical release as part of MASS Version 4.1. For the time being, users should be careful to consider whether their designs are being designed with more steel than might be otherwise required.

If there are any questions regarding this issue, design example, or whether this has an impact on a particular design you are working on, please do not hesitate to contact MASS technical support.

END_OF_DOCUMENT_TOKEN_TO_BE_REPLACED

Moderately Ductile and Ductile shear walls can now be designed within MASS to satisfy the ductility verification (required by CSA S304-...

END_OF_DOCUMENT_TOKEN_TO_BE_REPLACED

Oh yes we did! The title speaks for itself and engineers (or their I.T. professionals) everywhere rejoice Due to some behind the scene...

END_OF_DOCUMENT_TOKEN_TO_BE_REPLACED

With MASS Version 4.0 moving into Multi-Storey Shear Wall design, why doesn't the software check for something that seems squarely with...