Please ensure Javascript is enabled for purposes of website accessibility Why ISN'T the Factored Shear Force Scaled up for a Seismic Design? - MASS User Documentation

While you might not have expected it, MASS has it’s reasons for leaving your factored shear alone – even with earthquake loads applied

As covered in a series of posts available here, it is common for designs to be greatly affected by the additional considerations for seismic design. All shear wall designs with an earthquake type load combination are likely to see one or both of factored shear and shear resistances impacted by these considerations. This post outlines the one exception where these changed need not be applied. 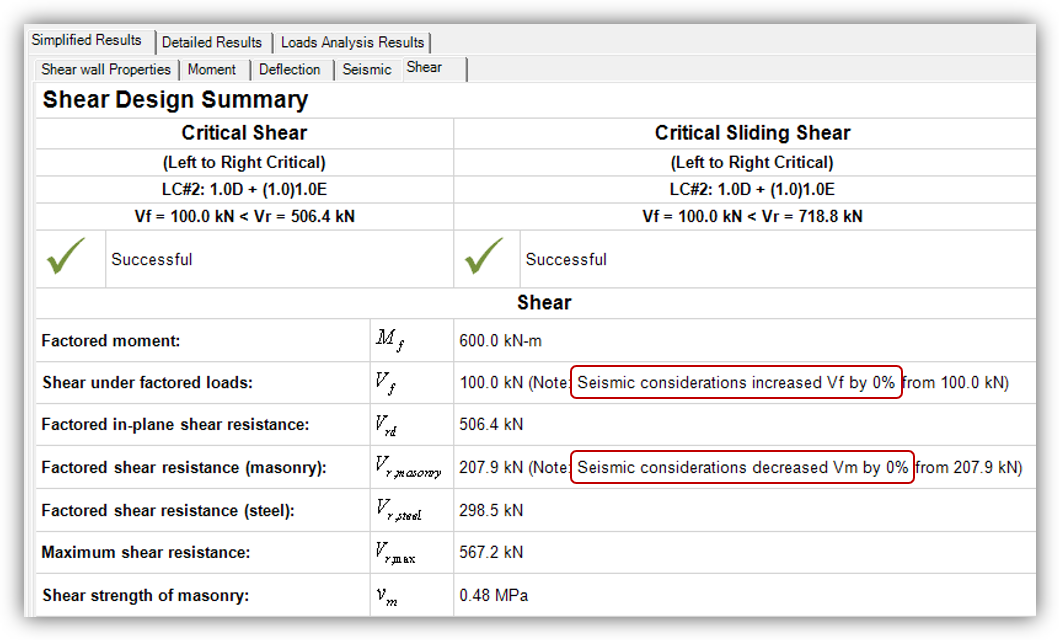 There are two cases where a design does not have any amplification to the factored shear for a masonry shear wall:

The moment resistance is exactly equal to the factored moment, resulting in a perfect one to one scaling of Vf,seismic to Vf,initial (only applicable for conventional construction as nominal or probable moments will always be higher for increased ductility).

Parts (a) and (b) are explained in further detail here, with a shear wall element and multi-storey application and examples linked.

The notion of “needing not apply” the rest of this clause can be an attractive one in the midst of banging your head against your desk, trying to get a design to be successful for both moment and shear. As seen in Note (2), being able to apply the provisions of Note 2 depends entirely on the identification of a shear failure mechanism.

What are ratios and what do they mean?

Within the detailed shear results, you may have noticed an Mf,ratio and a Vf,ratio listed among the equations and references. The distinction between a shear failure mechanism as opposed to a flexural failure mechanism is based on how close a shear wall’s factored loading brings it to the corresponding resistance the relative terms.

A shear failure mechanism is assumed by the software to exist when Vf,ratio exceeds Mf,ratio. In these cases, it is determined that as a result, the rest of CSA S304-14: 16.7.3.2 need not be applied and factored in-plane shear does not experience any amplification.

See the example design below:

While very close in this case, the shear wall is technically considered to have a shear failure mechanism. As a result, there is no need to amplify the factored shear force. 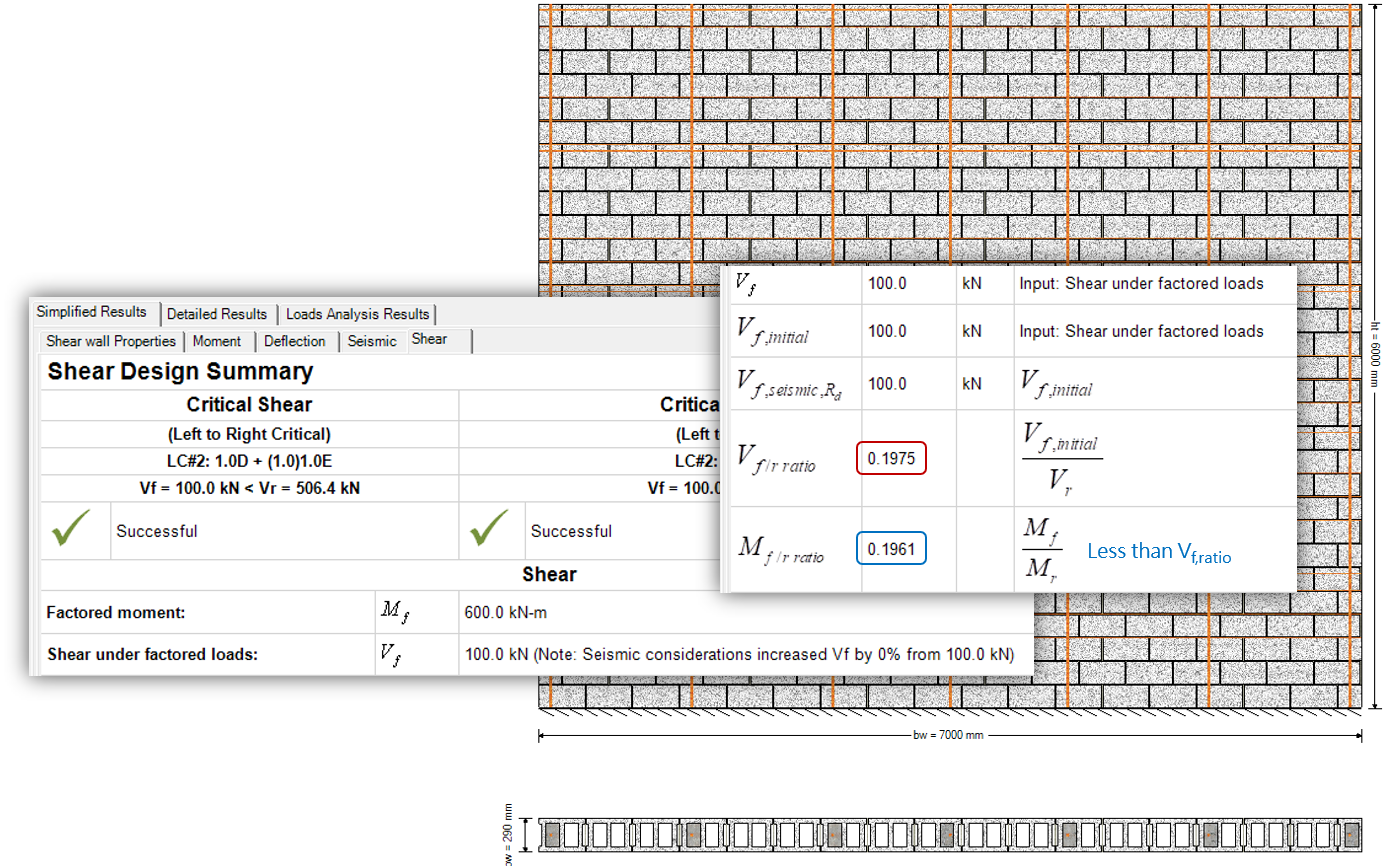 Contrast this same design with a fully grouted wall with the same dimensions, masonry unit, and reinforcement configuration. The presence of the grout helps with both the flexural and shear performance but the effect is greater on shear resistance. As a result, the failure mechanism identified is flipped form shear to moment, seen below: 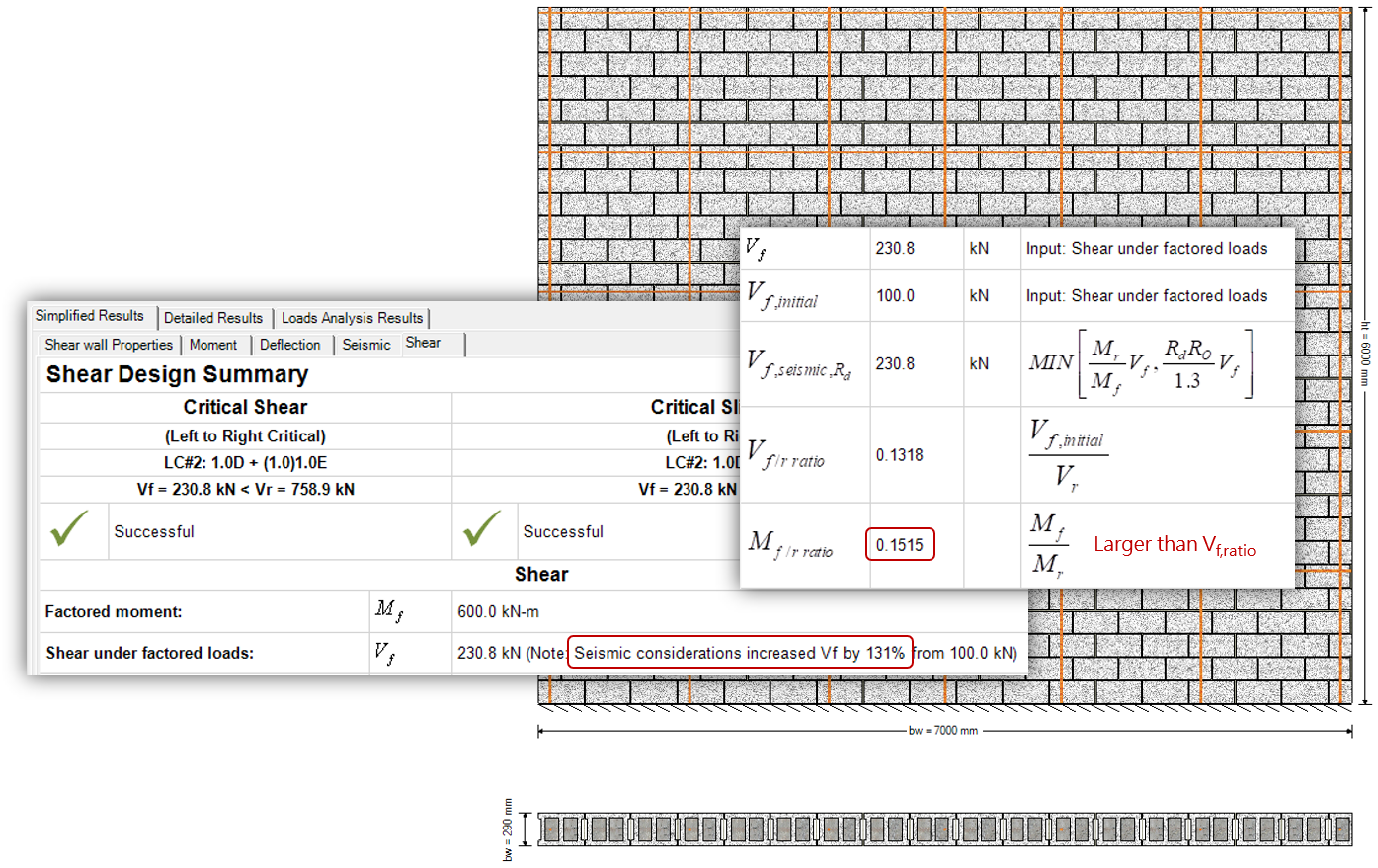 Since the factored shear ratio is now reduced further than the factored moment ratio reduction, the failure mechanism is flexural and the remainder of clause 16.7.3.2 must be applied.

Decisions made during moment design can have intended consequences further along during shear design. While the other seismic considerations can punish any additional flexural over-design, the specific case of moderately ductile squat shear walls can be particularly devastating.

One more thing to note is that for this example, the applied in-plane earthquake load was quite large for a single storey structure, at an unfactored (and factored) 100kN. That being said, the results ended up being independent of loading. “Why?” – you may ask audibly to your computer to no avail. As it turns out, the masonry unit size was a function of the required thickness in order to satisfy the unsupported height requirements of CSA S304-14: 16.7.4:

Due to the large unit, the vertical and horizontal reinforcement in the final design was placed largely in order to satisfy these requirements.

If you are encountering issues designing a moderately ductile squat shear wall, re-examining your moment design may be worth exploring. If you are still looking for answers, please do not hesitate to contact MASS support.

Let us know if you liked the post. That’s the only way we can improve.
Tags:
Ductility, earthquake design, moderately ductile, seismic amplification, Shear Wall Design, squat
Newer Why are different envelope curves plotted for the same Group?
Back to list
Older Why is masonry shear resistance reduced for seismic effects in a shear wall design?

END_OF_DOCUMENT_TOKEN_TO_BE_REPLACED

Moderately Ductile and Ductile shear walls can now be designed within MASS to satisfy the ductility verification (required by CSA S304-...

END_OF_DOCUMENT_TOKEN_TO_BE_REPLACED

Yes, you did read that right! The Multi-Storey module can be used to break a single storey design into multiple shear wall elements. &...