Load distribution in a MASS™ shearline can be separated into two discrete sections:

Once the loads are distributed to each pier, they are applied to each one within their corresponding pier tab. This section outlines how these loads are distributed and applied to various piers within a shearlineA module in MASS™ created to coordinate the designs of several shear walls for in plane moment, shear and axial load. A shearline refers to a shear wall containing openings and movement joints..

MASS™ uses relative pier rigidities to determine the percentage of lateral loading that is resisted by each pier within a shearline. MASS™ starts by calculating the relative deflection of each Pier, Parent pier and Strip within the shearline, neglecting any openings. For more information on this process, refer to p469-481 of [1].

For a cantilever or fixed-free Pier, the relative deflection neglecting openings,, is calculated using:

Which can also be expressed as:

for a solid, rectangular section.

For a fixed-fixed Pier, the relative deflection neglecting openings,∆solid F, is calculated using:

Which can also be expressed as:

for a solid, rectangular section.

The dimensions used for ∆solid c and ∆solid F as well as I0 are based on gross section properties with an Em based on a fully grouted f’m.

Deflection values for piers or parent piers cannot be used to calculate drift. The sole intent of their use is for lateral load distribution.

From these ∆solid c values, Rsolid can be calculated using:

Where Rtotal is the sum of all rigidity values within the strip. For more information on this method, refer to p476-478 of [1].

Load Distribution results can be viewed before performing a design. The loading is shown as a percentage of any lateral loads that are applied. The rigidities used to calculate these initial percentages are based on the smallest, weakest masonry unit. The results seen above in are based on the following shearline shown in .

The %Vtotal values have been added to the drawing to illustrate the path of any applied lateral loading on the shearline. The load is first shared between four Panels and then Piers 3-1 and 3-2 evenly share Panel 3’s distributed load.

Lateral loads applied along the top edge of a shearline make their way through various piers to the base of the wall. In many cases, there is a height difference between the top of the pier and the height at which the load was applied. When this occurs, there is an additional bending moment that must be applied to ensure that a pier is designed for the full moment experienced at the base of that pier.

Moments are only distributed to piers that do not share lateral loads with other piers within a strip. Applied moments are calculated using:

To demonstrate how moments are distributed and applied, refer to the following example shearline shown below in and . The loads shown are based on an applied lateral seismic load of 100kN.

Figure 59: Distributed moments within a shearline

Pier 2-3 is a similar section at the base of the wall with two openings above it. 26.8kN is applied to Pier 2-3. The Pier is 1m tall and there is a 3m elevation difference between the top of the Pier and point at which the load is applied. An applied moment of 26.8kN x 3.0m = 80.4kN*m is distributed to Pier 2-3 to compensate for this height difference in addition to the lateral point load of 26.8kN. A similar procedure is used for Pier 4-1.

Pier 3-1 and 3-2 share lateral loading within the same strip therefore no additional moment is applied to either pier.

The distribution of vertical loads can be summarized in 4 points:

Vertical load distribution in MASS™ determines the unfactored loads applied to individual piers. When each vertical load has been distributed through the shearline, the total resultant force from each load is calculated and applied to the top of the pier in the form of an axial load, in kN.

MASS™ does not take load dispersion into account when distributing a vertical load. Loads are applied directly to the piers below.

In a simple example shearline with one opening, 4 piers are labelled as shown below in . The blue arrow at the top of the wall represents the user applied vertical point load and the red arrows represent the same load as applied to Piers 1-2, 1-3 and 1-4. Pier 1-1 does not lie beneath the applied load so it does not experience any of the load. 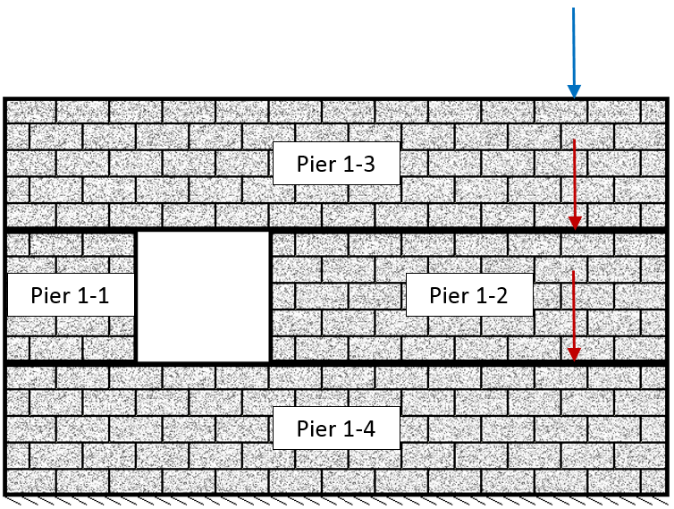 Similarly, with uniformly distributed loads (UDL’s), they are resisted by the Piers that lie directly below them. This process can be extended to all other types of loading, as seen below in . 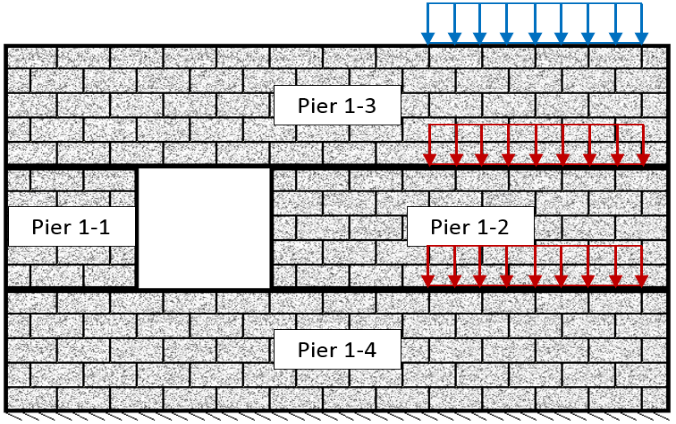 When vertical loads are applied or distributed above openings, they are converted to resultant vertical point loads on either side of the opening (see ). 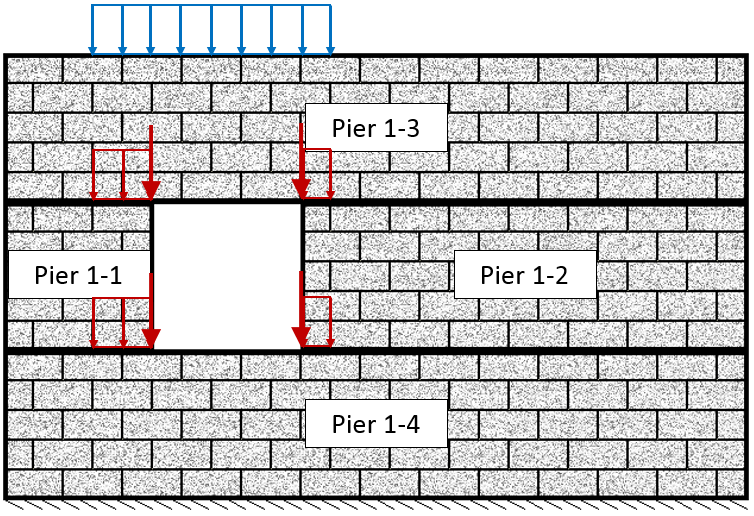 Figure 62: UDL applied above an opening 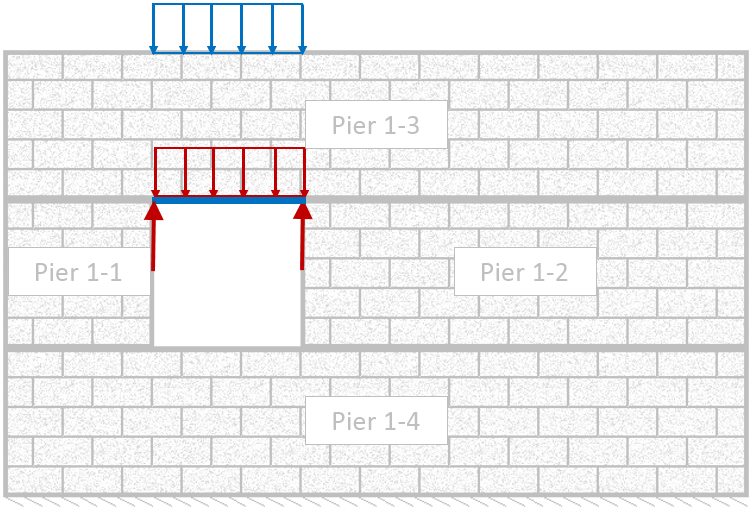 Vertical load distribution is not restricted to UDL’s. Point loads and line loads with varying magnitudes can also be distributed using the same methodology.

In some cases, movement joints in shearlines can result in vertical loads transferring from one panel to an adjacent panel. This will occur if: 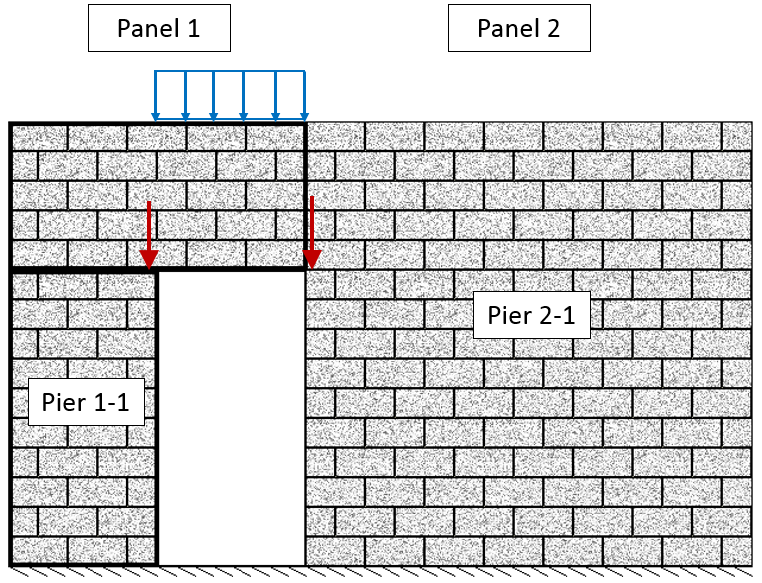 Another possible case for vertical loads transferring to an adjacent panel is when there is a movement joint with a horizontal offset as seen below in . 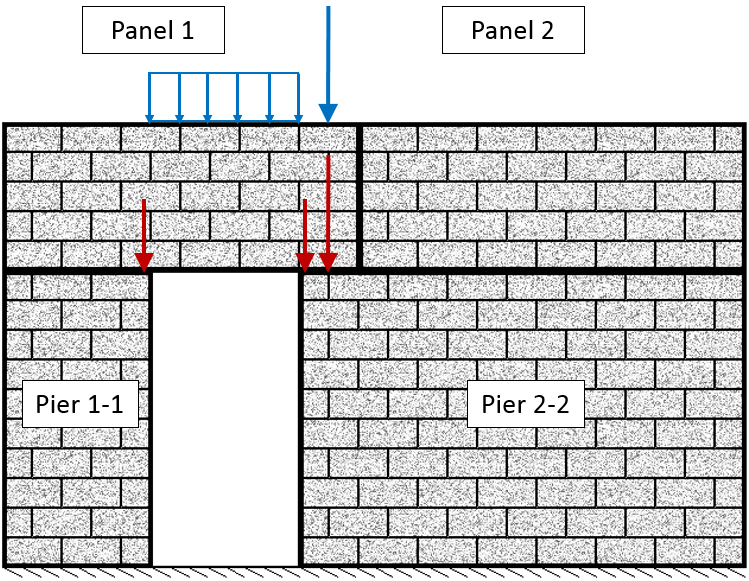 Note: Care should be taken to ensure that all applied loads can be properly resisted by the masonry assemblage.

Figure 66: Axial load applied directly above a shearline movement joint, resisted by the Panel on the left

When all of the lateral and vertical loads are distributed, they are applied to piers within pier tabs. To see the unfactored loads applied on a pier:

MASS™ applies vertical loads by calculating the resultant of each force and applying it to the centre of the cross section at the top of the pier. Resultant forces are taken for vertical line loads and components of self-weight.

A vertical load can be divided several times as it is distributed through a shearline. Distributed components of a user applied load are added together and applied to the pier as a single load. These loads are combined when determining the total magnitude, as seen in the example in and . 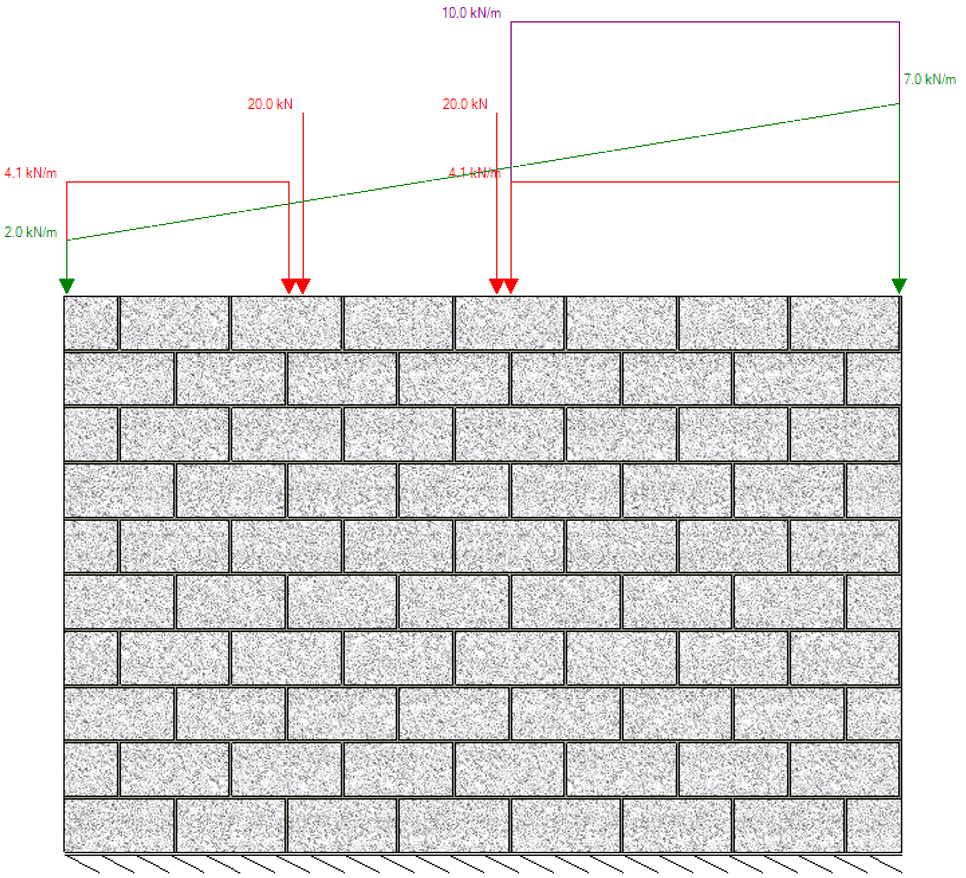