The Load Analysis Results tab is activated when loads are placed on the shear wall (during the loads input design step). It shows information about the factored moment, and factored shear at points of interest along the height of the wall. The load analysis results contain two tabs:

To view the factored moment and factored shear data:

The Moment and Shear tab contains a table with the factored moment and factored shear (out-of-plane shear and out-of-plane sliding shear) at points of interest along the height of the out-of-plane wall. The interval of the points is 100 mm.

Note that these intervals all divide equally into a modular length.  Additional points are included at the following locations:

A sample loads analysis results table for moment and shear is shown in . 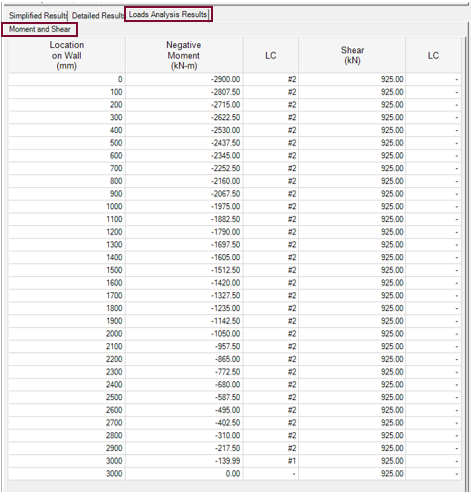 The first column of the table indicates the location of the points of interest on the height of the wall, from top to bottom.

Note: Changing the load combination (using the ‘Critical Load Envelope’ drop-down box) alters the loads analysis results that are displayed. The wall, however, is always designed to resist the critical load combination.