When designing out-of-plane cantilever walls subjected to lateral loads, the MASS software can be used to check the wall’s deflection against limits in the CSA Standards. While designs within MASS automatically perform this check, there are some cases where it may be important for an engineer to check the calculated deflection at the top of the wall and compare it to a deflection limit they think is suitable for the wall they are designing.

While MASS performs serviceability checks strictly in accordance with CSA S304-14, there are some cases where the requirement for a wall to be checked for deflection may not kick in for designs where deflection might be a concern. This is more likely to be the case for cantilever walls, since this threshold is a function of span, and not effective height.

MASS is fully equipped to do this check. However, the first step MASS takes in this process is to determine whether the deflection needs to be checked or not based on CSA S304-14.

Where “d” is the distance from the extreme compression fibre to the centroid of tension reinforcement.

For example, let’s say we have a cantilever wall with the following properties and cross-section shown below:

An unfactored wind load of 1 kPa is applied along the height of this wall and a wind load deflection limit of h/360 is specified.

Note that by default, MASS applies a deflection limit of h/180, however tighter limits may be required in CSA S304 such as when there are brittle finishes attached to the wall. 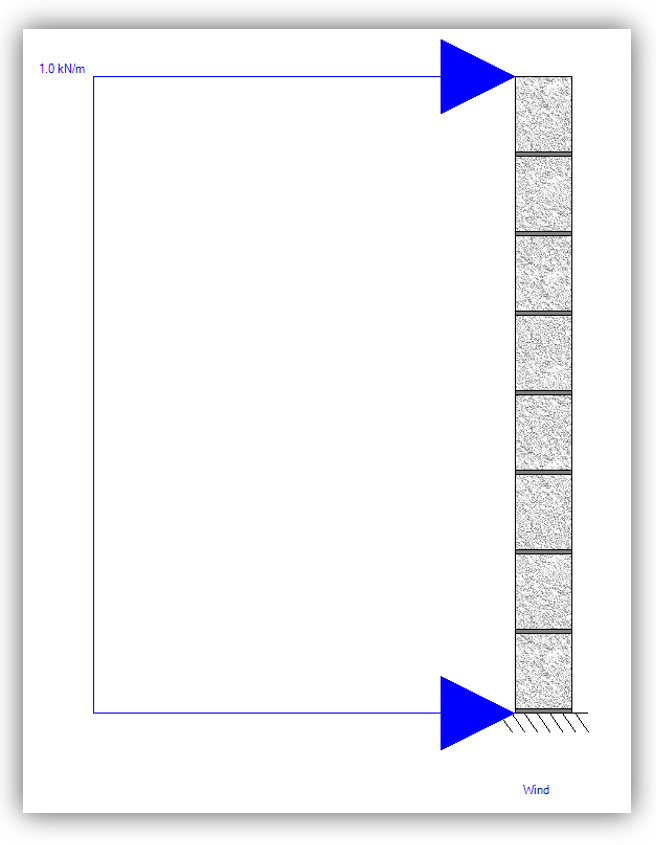 The deflection limit for this 1600mm cantilever wall will then be:

The deflection of this 1600mm cantilever wall under an applied 1 kPa wind load is calculated by MASS as 5.24mm (or H/306). When checking the Simplified Deflection results, MASS reports that the wall design is successful, even though the limit appears to be exceeded.

Why is the wall design not failing?

The height limit input into MASS of H/360, or 4.44 mm, is less than the calculated deflection of this wall, so there seems to be an issue with the software. Before MASS compares these values, it first checks whether deflection limits should be applied for wind load deflection based on Clause 10.14.1 from CSA S304-14. In this case, the condition is not satisfied, and deflection need not be checked. The “d” value in this example represents the steel depth within the wall, measured from the compression face and would be 140/2 = 70 mm. Therefore, 25d would be calculated by MASS as:

This is greater than the span of 1600mm in this example. Therefore, MASS concludes from this that the deflection does not need to be checked. The software does however show all the deflection calculations regardless of whether or not this clause is satisfied, which can be confusing to the designer.

Now if we do the same example but with a 1800mm cantilever wall instead of a 1600 mm wall, Clause 10.14.1 from CSA S304-14 is satisfied, and the deflection needs to be checked. The maximum deflection under wind loading limit is then calculated as:

The expected deflection of this 1800mm cantilever wall under a1 kPa wind load is calculated by MASS as 8.98 mm. When checking the Simplified Deflection results in MASS, it is seen that the wall design has failed.

This is a case that highlights a potential oversight in the CSA S304-14. The limit of 25d is likely meant as a time saver for engineers to not check designs where deflection isn’t expected to be an issue. If the effective height were evaluated instead of the height, then it is likely a cantilever wall will exceed this limit.

For cantilever walls, ft, the limit for the flexural tensile strength in Table 5 is extremely low (0.1 MPa) to prevent engineers from counting on mortar bond. This means that in this example the cracking is assumed to occur very early, and the transition from uncracked to cracked brings a massive drop in stiffness.

Users can also specify a total deflection limit that is checked regardless of whether or not the span exceeds the 25d limit.

In conclusion, MASS follows the strict language of CSA S304-14, and walls designed using MASS will satisfy the requirements of CSA S304-14. At the end of the day, it is left up to the judgement of the engineer to make the final call.

CMDC is always evaluating the calculations and processes that are used by the MASS software. It is part of the ongoing technical support as the authorized service provider for National Masonry Design Programs (NMDP – publisher of MASS) that these issues continue to be identified and addressed as they are found.

END_OF_DOCUMENT_TOKEN_TO_BE_REPLACED

Understanding the Total Height input when using MASS can add considerable moment capacity to a shear wall design   This articl...

END_OF_DOCUMENT_TOKEN_TO_BE_REPLACED

Version 3.0 takes everything from previous software versions and adapts it to the latest standards   This article originally w...