While not always calculated at the critical location of a wall, out-of-plane walls are typically governed by flexure.

In cases where a bug or other issue is found in the MASS software, announcements are posted on the software’s known bugs page, as well as on this page here. While it is encouraged that suspected bugs are submitted by engineers through technical support, what typically happens is situations like this one where I am working on something unrelated and notice behaviour that does not seem quite right. For this issue, present since the initial software release over 10 years ago, it was likely not noticed because out-of-plane walls are not typically shear controlled.

If there is any concern regarding a specific project or design done using the MASS software, please do not hesitate to contact MASS support. A short video explains it below with the remaining article going through the necessary background information.

The release notification includes a brief summary, some background information, along with an example.

Depending on the masonry unit size and loading pattern, it is possible that the masonry shear strength, vm, is overestimated when attempting to check at the critical location on the wall. While maximum factored shear typically occurs closest to the supports for a simply supported wall, the location at which it is checked may result in a relatively high shear resistance value in comparison to the course above or below where factored shear is only slightly reduced. This is a result of the ratio of moment to shear multiplied by effective shear depth used to determine masonry shear strength.

As a result, an upcoming minor software release will perform the comparison between factored shear and shear resistance along the height of the wall, and not only where factored shear is the highest.

This potential oversight is likely not critical to final design results as it is unusual for out-of-plane wall design to be controlled by shear. That being said, it is up to the designer to ensure that the software is performing design calculations in the same way they would perform them by hand.

MASS approached out-of-plane diagonal shear design by first finding the location of maximum shear before calculating a resistance that can be used to determine whether the wall is adequate to resist the factored loads. 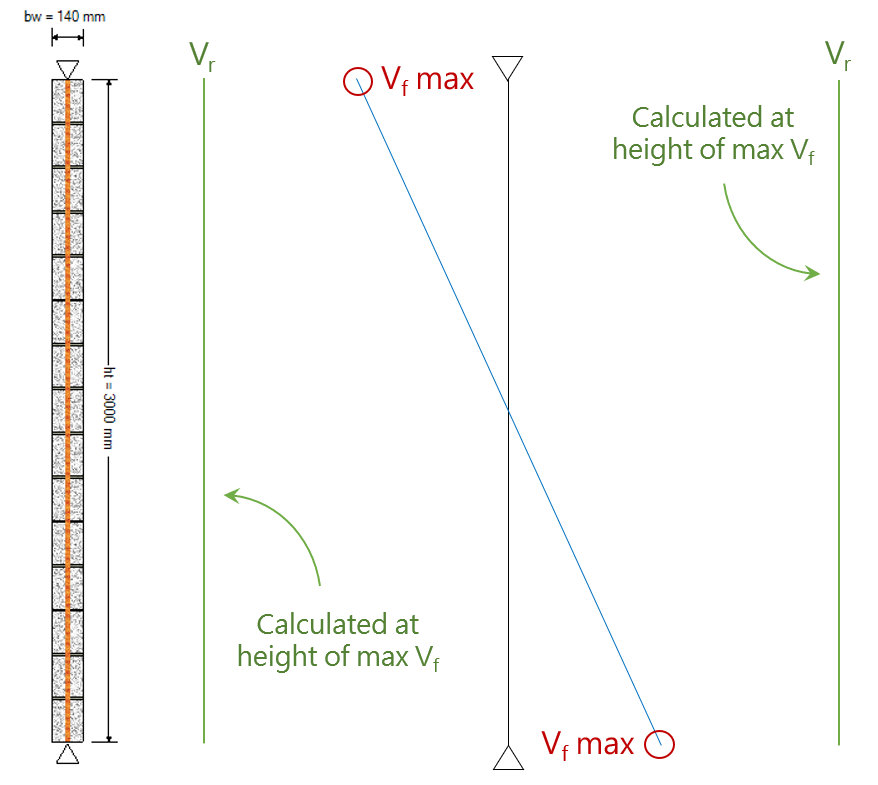 The masonry shear strength equation is a function of bending moment and shear which varies along the height of a wall. MASS calculated this only once – at the location of maximum shear with the assumption that satisfying shear design here will also be true for the other portions of the wall. This shear strength calculation is highly sensitive to the location at which shear resistance is calculated.

When checking by hand, as seen in the example section further below, it is possible for there to be a disproportionate drop in shear resistance relative to the reduction of factored shear at different locations on the wall, possibly resulting in a case where a more critical design section is not checked by MASS. These differences, both larger and smaller, compared to the value determined at one location are shown below if calculated continuously along the height of the wall. 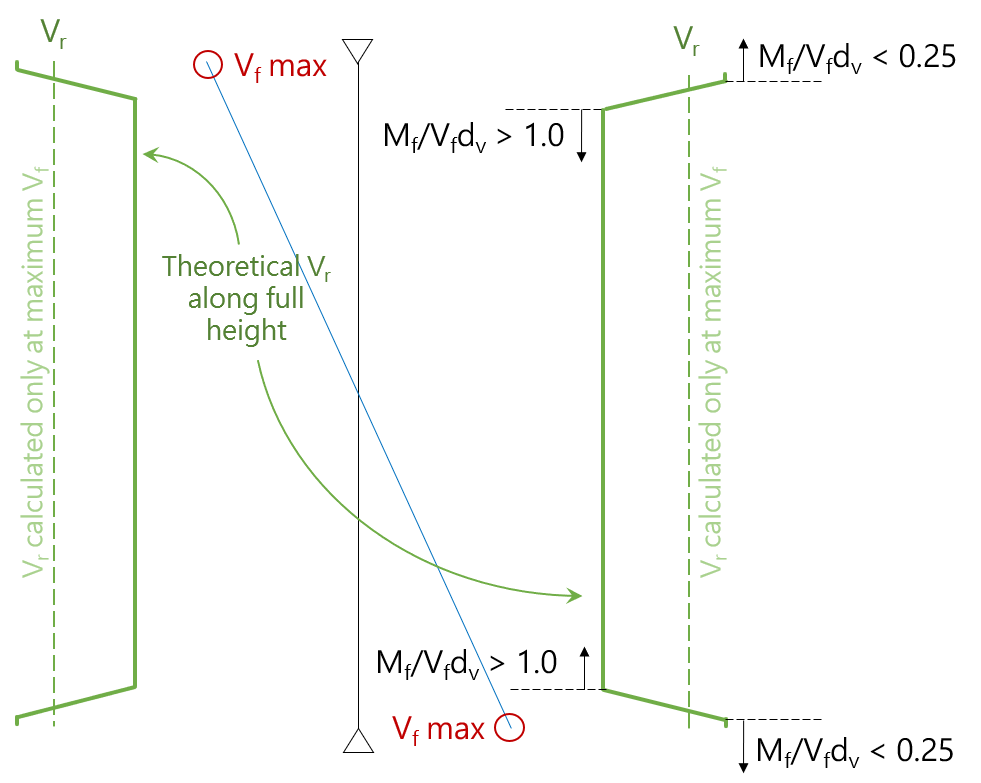 Note from the figure above that the larger resistances closest to the support locations are not calculated in MASS since the software uses a factored bending moment taken within the closest course of masonry, or 200mm. Theoretically, this larger value exists if looking at shear resistance continuously along the full height of the wall, where there is a bending moment of 0 kN*m at the supports.

Practically speaking, this can be checked at each course as is currently done for out-of-plane sliding shear. This accomplishes the main shortcoming of missing cross-sections near the support where the Mf/Vfdv ratio is at or above 1.0. 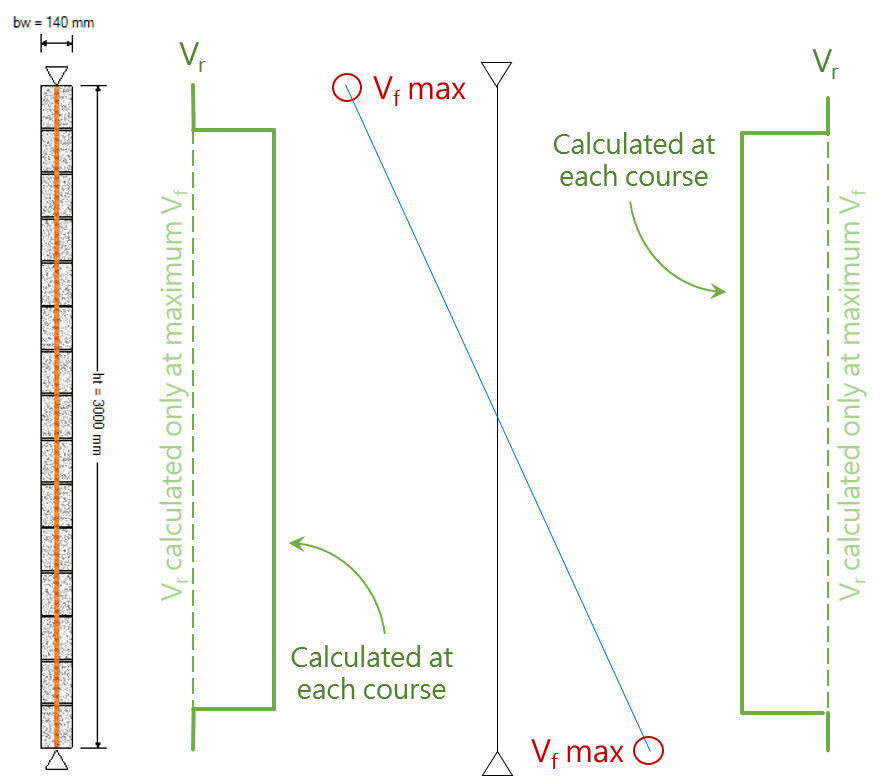 With no axial load applied, a wind pressure of 1.0kPa is resisted by the wall, laterally supported along the base and ceiling connections. As a result, the factored shear experienced at the base and the ceiling supports are:

While the factored bending moment at the exact location where shear is the largest is technically zero, MASS uses an average bending moment along that top course of masonry, resulting in 0.1 kN*m being used in the evaluation of masonry shear strength.

For the top course of masonry, shear strength is calculated based on a Mf/Vfdv ratio which is between allowable limits of 0.25 and 1.0. When it is outside either limit, the limit value of 0.25 or 1.0 is used.

Note that the effective shear depth is between the compression edge of the wall and the reinforcement in tension. In cases with 1 bar in the middle of the cell (most cases), this is half of the wall thickness, or 70mm (0.070m).

When this ratio is substituted into the shear strength equation, the result is:

Recall that an effective masonry compressive strength, f’m,eff, is used to determine a weighted average strength value that can be used to represent the cross section which is a combination of grouted masonry (f’m,gr = 7.5 MPa) and hollow masonry (f’m,h = 10 MPa).

As seen in the demonstration video, the corresponding shear resistance using this calculated shear strength is 6.0 kN – nearly triple the maximum factored shear experienced within the wall.

Looking only one course of masonry lower, where the factored shear is reduced to 1.96 kN, masonry shear strength can be determined using the marginal bending moment experienced at this location: 0.39 kN*m.

Using the upper limit of 1.0, masonry shear strength can be calculated using this new ratio:

Of note here is that in this example, while not at the critical section where factored shear is greatest, looking elsewhere on the wall where shear is less than 7% less, the masonry shear resistance is 25% lower. 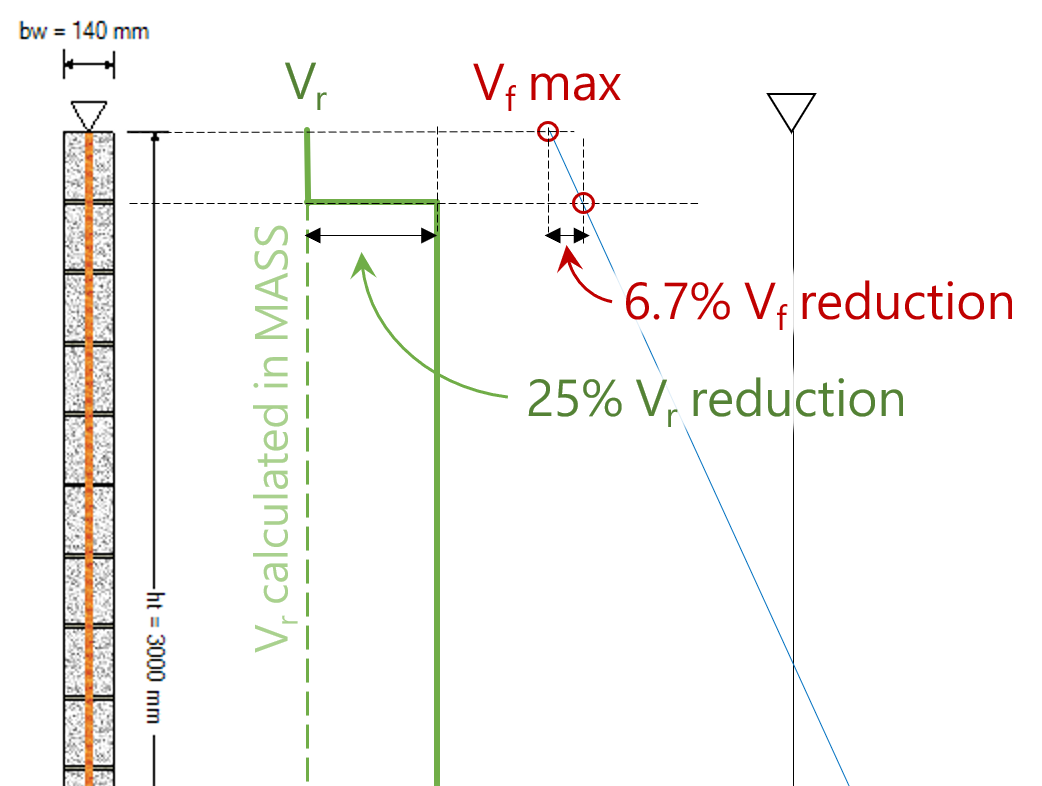 While an example could not be found using uniformly applied pressures, it is theoretically possible that evaluating shear resistance at only the location of maximum shear may possibly miss other scenarios where the wall is found to fail elsewhere.

This potential oversight will be fixed in the next minor revision of MASS by evaluating diagonal shear resistance along each course of masonry, just as is done for out-of-plane sliding shear.

This change will allow the software to properly take the changing Mf/Vfdv ratio into account.

There is not a current timetable for the next release.

When a new minor release of MASS is announced, please replace your current installation with the patched version.

Bugs of this nature are taken extremely seriously. In this case, I was the one who found it when reviewing formula flow charts in anticipation of an unrelated future software change. There have not been any instances to our knowledge where an out of plane wall design has been impacted.

Why the large reduction in shear resistance?

Another point to ponder is the reason for such a large drop in so close to the support. In particular, why is it so sensitive to the Mf/Vfdv ratio with outer bounds of 0.25 and 1?

The out-of-plane shear equation in CSA S304:10.10.3 references vm, the masonry shear strength outlined in CSA S304:10.10.2.3. This shear strength equation is a subsection of the shear wall shear resistance section CSA S304: 10.10.2 titled: “Factored in-plane shear resistance of walls”. In shear walls, the difference in geometry means that the effective shear depth is a larger proportion of the overall dimensions, making the result far less sensitive to the Mf/Vfdv ratio. These are also equations based on test data with reinforced concrete where this (2 – Mf/Vfdv) term was added to the shear equation to empirically account for the changes in shear behaviour resulting from elements fixed at the top as well as the base.

For the majority of the height in nearly all simply supported masonry walls bending out of plane resisting a uniformly distributed pressure, Mf/Vfdv is taken as 1 for most of the height of the wall.

Does this affect final designs?

Once again, the design of out-of-plane walls tends to be controlled by flexure under axial loads. Even in the example outlined above where the uniformly distributed wind pressure was high enough for the factored bending moment to approach the moment resistance, the wall still had an out-of-plane shear resistance that was twice as large as the factored shear at the lower position along the wall – even after accounting for this difference.

What about other wall types?

CMDC is always evaluating the calculations and processes that are used by the MASS software. It is part of the ongoing technical support as the authorized service provider for National Masonry Design Programs (NMDP – publisher of MASS) that these issues continue to be identified and addressed as they are found.

When designing out-of-plane cantilever walls subjected to lateral loads, the MASS software can be used to check the wall’s deflection a...

END_OF_DOCUMENT_TOKEN_TO_BE_REPLACED

Understanding the Total Height input when using MASS can add considerable moment capacity to a shear wall design   This articl...

END_OF_DOCUMENT_TOKEN_TO_BE_REPLACED

Version 3.0 takes everything from previous software versions and adapts it to the latest standards   This article originally w...

END_OF_DOCUMENT_TOKEN_TO_BE_REPLACED

With the release of MASS Version 3.0, the previous edition of MASS has gotten a small adjustment   This article originally was...

END_OF_DOCUMENT_TOKEN_TO_BE_REPLACED

Understanding the issue, when it can come up, and what can be done to account for it   This article originally was featured on...

END_OF_DOCUMENT_TOKEN_TO_BE_REPLACED

What is the difference between the length, clear span, bearing length, and design length of a masonry beam in MASS?

Understand the different values and what they represent   This article originally was featured on the MASS Software Blog, form...

END_OF_DOCUMENT_TOKEN_TO_BE_REPLACED

How to use MASS to Design Walls that Span Horizontally

Getting the most out of MASS is easy once you understand how to model your design within the software   This article originall...

END_OF_DOCUMENT_TOKEN_TO_BE_REPLACED

Ahead of the official release, you can sign up and start using the current release edition of MASS Version 3.0 today This article orig...

END_OF_DOCUMENT_TOKEN_TO_BE_REPLACED

One thought on “Bug Notification: Out-of-Plane Shear Resistance checked only at location of maximum shear”