MASS might be telling you to place a bar in every cell. Maybe you need that much steel… but what if you don’t?

The issue at play here is that by default, MASS will only grout cells which have a vertical reinforcement placed within them. Combine this with relatively high axial loads and the end results is a wall with a bar in each cell simply to get the wall fully grouted.

When can this happen?

Open up a new shear wall and set the length to 1400mm and the height to 4200mm. Apply an axial load of 600kN (weight that could be coming from storeys above) and a lateral earthquake load of 35kN. Also note that the grout pattern is set to partially grouted by default (but don’t change it. This is important for later).

Proceed to the moment design stage and the results are successful using the highlighted properties below: 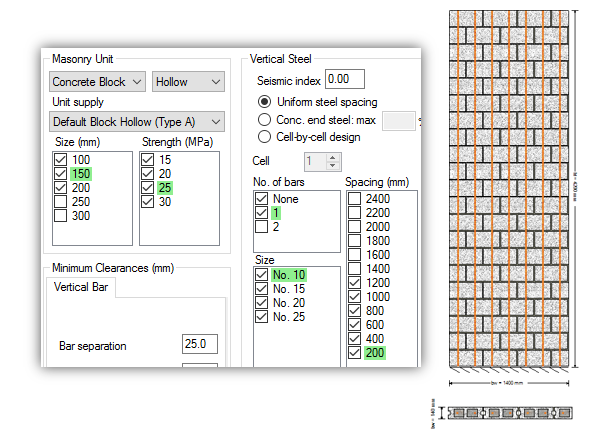 MASS is placing No. 10 bars in all 7 cells to get a passing design. (Shear design easily passes as well but for the sake of this example, the focus will be on moment design since that is when vertical reinforcement is placed).

After this initial design, you might look at this and think that if you were to increase the bar size to No. 15 bars from No. 10’s, you can get by with half the bars in half the cells. After all, there would still be the same cross sectional steel in the wall. If you start unchecking the smaller bar sizes, what ends up happening is that MASS continues placing the larger, remaining sizes of bars at a 200mm spacing. Alternatively, if you were to force a 400mm bar spacing, the design would fail.

This is because reinforcement is not being added for the steel and instead needed for the grout that is also present within a reinforced cell.

Try changing the grouting pattern from partially grouted to fully grouted and notice the difference; the same shear wall now passes moment design without any reinforcement! 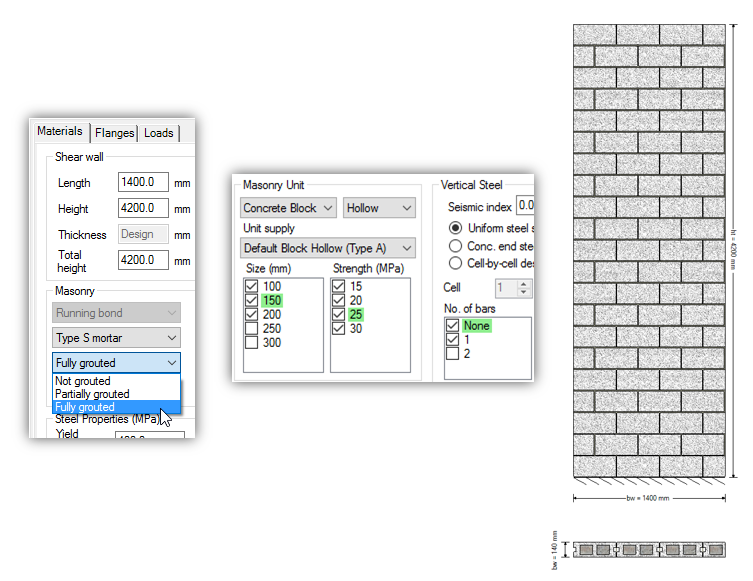 URM Design Disclaimer
Note that in in accordance with CSA S340-14: 7.5, unreinforced shear walls may not be an option. In particular, 7.5.3,  if other walls are going to be reinforced.

The answer to why this happens can be found by comparing the P-M Diagrams of the two designs. The important thing to look at is roughly where the load combinations lie within the envelope curve. In this case, load combination 1 (1.4D) is close to the horizontal line at the top of the diagram, Pr,max. In this example, axial load is the critical element which is dictating the rest of the design results and the first shear wall configuration to have an adequate axial load resistance will likely be the successful design. Notice also that this is independent of the lateral earthquake load since load combination #2 (1.0D + 1.0E) is nowhere close the envelope curve in either diagram. Both shear walls have adequate capacity so why is MASS placing “unnecessary” steel?

The answer is that since the “partially grouted” selection is enabled when designing this shear wall, cells are only grouted after a bar is placed there. This can be seen even more clearly after plotting both interaction diagrams within the same axes. The added capacity that reinforcement contributes is generally in the lower half of a wall’s axial load resistance. 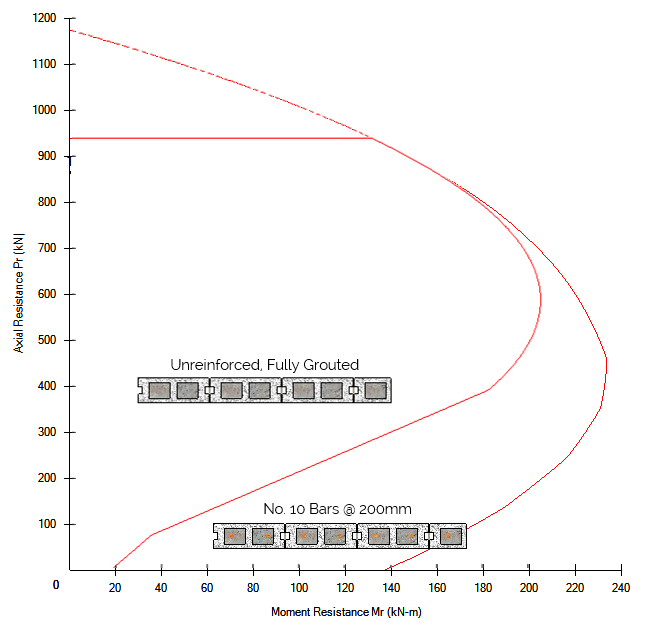 Next time you are looking at your design results, just be aware that reinforcement can be placed for multiple reasons and in walls where the factored axial load is high, MASS may be placing bars solely for the grout that accompanies them.

Exactly how MASS designs shear walls is a post for another day but in the meantime, the important thing is to think critically and ask why the software is doing what it is doing. The answer may surprise you!

MASS is a product of the joint partnership between CMDC and CCMPA. As the authorized technical assistance provider for MASS, CMDC can be contacted regarding any questions that may arise over the course of a project. Please do not hesitate to contact us

Tags:
200mm spacing, fully-grouted, Grouting Pattern, Reinforcement, Shear Walls
Newer Understanding the χ factor and how it can help with masonry beam design
Back to list
Older How to start designing in MASS using the new 2014 S304 Standard

END_OF_DOCUMENT_TOKEN_TO_BE_REPLACED

Nerd Alert: This isn't need to know information but may be useful for someone out there who is digging into the MASS Multi-Storey Shear...

END_OF_DOCUMENT_TOKEN_TO_BE_REPLACED

Why does MASS use unreinforced analysis for a design with reinforcement?

Adding steel to a wall design does not necessarily mean that the steel is being used. This article covers the basics on how to avoid a...